As a trainer, Washington specializes in nontraditional breeds — the poodles and terriers and griffons who are just as smart and talented but don’t fit the profile of the standard duck dog. 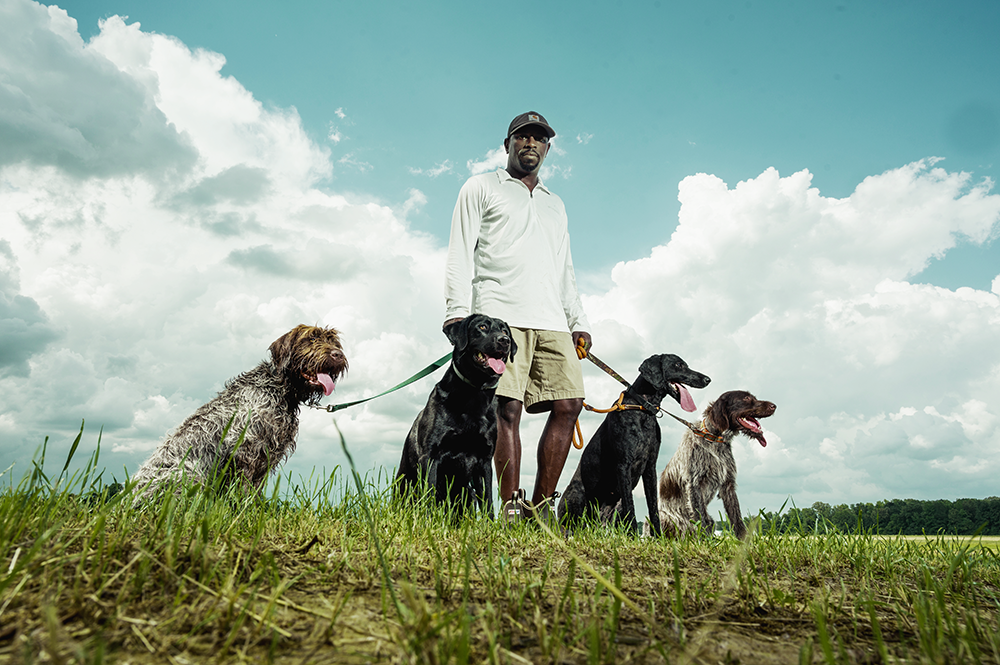 Mike Kemp
Bernard Washington (with, L-R, Bella, Kiwi, Roux and Baloo) has gotten used to the odd looks he gets when he arrives at a field test with one of the nontraditional hunting dog breeds he trains. 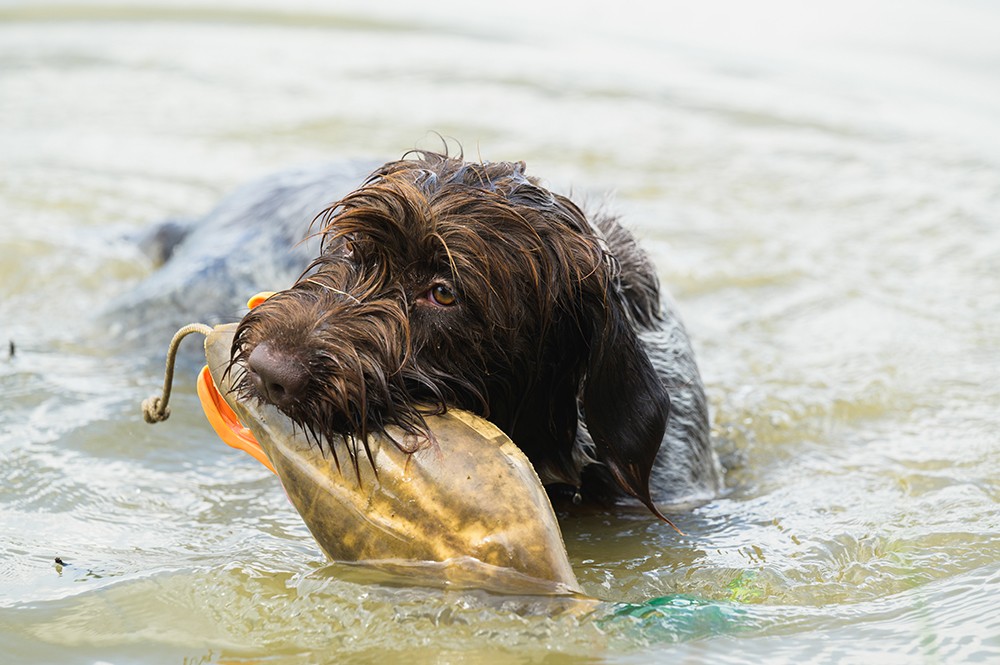 Bella, a German wirehaired pointing griffon, is an unlikely choice for a duck dog, but Washington proves these breeds can perform just as well as a standard Labrador.

Bernard Washington had hunted for most of his life and had seen both poorly-behaved and well-trained hunting dogs in action.

But it wasn’t until several years ago, when Washington got soaking wet while serving as his own retriever, that he truly realized the value of the well-trained kind.

“I fell in and swam back and that day I swore to myself I’d never hunt without a dog again,” he said of his mishap in a pond north of Little Rock.

There is little chance of such a thing happening these days. Washington, 35, owns and operates Searcy-based Broneck Kennels, a 15-acre setup that includes a tech pond with finger points and islands.

He is in his fourth year as a business owner, moving from Cabot to his Searcy location within the past year, but has been training dogs for closer to 10 years.

“An animal and owner have this bond, this line of communication, even more than most people have with their dogs,” said Washington, a former RV salesman who watched his dog training passion slowly take over his life until he jumped in full time.

Washington trains the labs and retrievers who appear glossy and heroic in the hunting magazines, and Kiwi, his personal dog, is from that class. But he puts his focus on the nontraditional breeds — the poodles and terriers and griffons who are just as smart and talented but don’t fit the profile of the standard duck dog.

“That for me, especially like the oddball duck breeds, the nontraditional relative breeds, I feel their pain man,” Washington said.

The nontraditional dogs may draw a few double takes in the field, but as a Black man in the hunting and dog training industries, Washington has gotten the same reaction. Hence his business’ name, “Broneck” — a cross between “brother” and “redneck” — and Washington’s soft spot for the “other guys” of the hunting dog ranks.

“Hunting and dogs are like mac ‘n’ cheese,” Washington said. 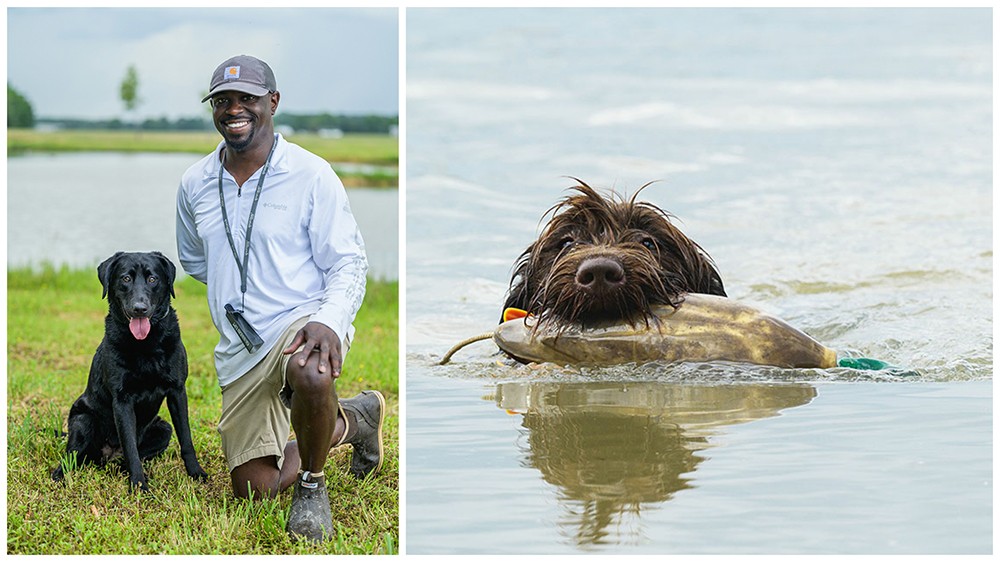 Helena farmer Will Cashion, 34, was looking for someone like Washington the day he decided to buy his German wirehaired pointing griffon he named Baloo.

“Since he’s not a traditional lab hunting dog, I was looking outside the box for someone who trains not only labs,” Cashion said.

He found Washington, who had only recently gone into business full time, on Facebook and noted that he was training a shorthaired pointer at the time. Cashion sent Washington a message, and there began not only a professional relationship, but a personal friendship.

“Honestly I think I was a little bit intimidated to talk to other trainers because it was my first gun dog, but he was just easy, easy to talk to,” said Cashion, who has since become a hunting partner with Washington.

“He calls him my step dog,” Washington said. “That dog has probably spent more time with me than he has Will.”

Washington took on Baloo when he was 14 weeks old, and when the dog “aged up” Cashion returned Baloo to Broneck for gun-dog training. After their first hunting season Baloo went back for advanced training because he had performed well in testing and trials, which he has continued to do, never failing entry-level or intermediate tests.

“He’s kind of the oddball that made me the guy. That dog started it for me,” Washington said of his fondness for nontraditional breeds.

Baloo has since developed a cult following among the owners and trainers at the various tests and trials. If Washington doesn’t bring him along they ask “Where’s that weird little dog?”

“I was in Tennessee. There’s this old fellow there, he’s got his arms crossed and he’s got this look on his face.” Washington said.

The man was scratching his head, trying to figure out what kind of dog it was that made up half of the unusual looking pair.

“I said ‘If I’m going to stand out, the dog might as well stand out,’ ” Washington said. “He laughed and I laughed and it was fine. Then [Baloo] went out and killed the test.”

It’s a familiar arc for Washington. People see him training the odd-looking dogs or showing up at a hunt and they have questions, but before long friendships are made and barriers are torn down.

“Being a duck hunter gives me a different perspective on racism as a whole,” Washington said. “Just because, again and more times than not, whenever we get in a boat or get in the blind, and my buddy is bringing his buddy, it never fails, the guy who never hunted with me is like, ‘Holy **** he’s Black.’

“By the end of the hunt we’re exchanging phone numbers, we’re drinking beer next weekend. Life’s good. I think it’s been a blessing to my life for sure.” 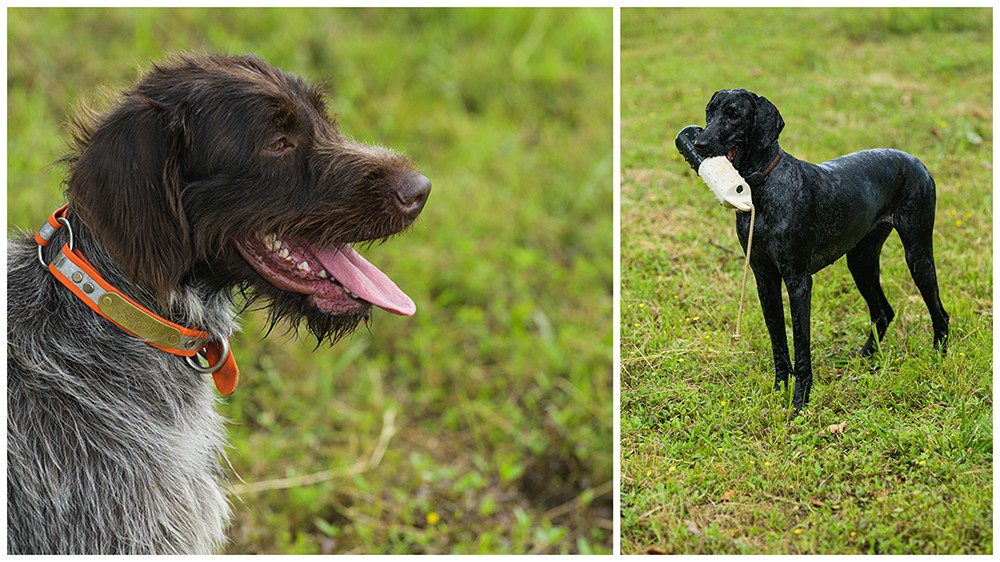 Growing up in the Arkansas Delta, hunting seemed as natural as breathing to Washington. His father was a duck guide and hunter and Washington learned about hunting etiquette and duck calling at a young age.

“I was blessed to grow up on a very nice farm … where duck hunting was just kind of, that’s what we did,” Washington said. “You waited 305 days for those 60.”

The Washingtons owned a traditional black lab named Pepper, who, by Bernard’s account, was a disgrace to labs everywhere. Pepper “wouldn’t fetch a biscuit,” Washington said, and committed numerous hunting faux paus like knocking over the guns.

After doing most of his own retrieving, and getting soaked in the process, Washington took an interest in dogs, paying $300 for his first dog Meme, now retired. He delved into research, watched YouTube videos and went to his first hunt test in 2012.

Arriving to the test in his four-door Chevy Malibu, Washington got the usual odd reactions.

“I’m just completely a fish out of water at this point. And this old guy, I think his name was Clint Johnson, he walked up to me and said ‘First time huh?’ ” Washington said. “I was like ‘Is that obvious?’ He was like ‘You stick out a little bit.’ ”

Washington got some tips from Johnson and continued to acquire dogs and send them to trainers, peppering them with questions, and he soon began training friends’ dogs.

When Kiwi was born in 2019, Washington felt he’d gained enough experience to branch out on his own. He was working his sales job 12-14 hours a day while his dog training waiting list was six months long.

“I finally got to a point financially where I was like ‘If I’m going to take a leap I better do it now or it will never happen,’ ” Washington said.

“Just because that gives me enough time in the day to give every dog the time they need,” Washington said.

Every dog has a personality, and every training approach should be tailored to that dog. The nontraditional breeds may raise some eyebrows, Washington said, but they do the work and win people over, just like their trainer.

“It’s personal at that point because I understand,” Washington said. “Yes we are a little different but we love the sport just like anybody else does.”